Mwai Kibaki is a former Kenyan president who served for two terms in 2002 and 2007 elections. He is one of the richest people in the country after serving in office and other places. During his reign, he warmed the hearts of many with his hilarious jokes and light moments. Despite his massive wealth and riches, word came out of his sister who is living in total poverty. Esther Waitherero, sister to Mwai Kibaki is still living in a small wooden house in his home village Othaya. In the small village in Nyeri County, she tells of the amazing memories she had with the former president. Speaking to reporters and other people, she recalls the fun activities and cooking for Kibaki. 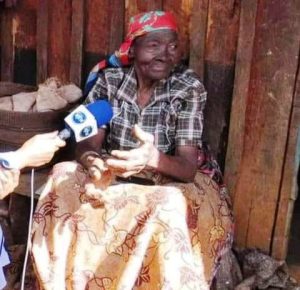 Waitherero generates income for herself by weaving and selling baskets. Esther has spoken on multiple occasions that she wishes to have her own car, electricity and water. She wishes to not have such a hard life and not have to go to the river anymore. Her conditions have shocked many and no one knows why Mwai Kibaki is not chipping in to help.

The Rich Machakos Witchdoctor With a KSh14 Million Mansion