Dennis Itumbi is a Kenyan political strategist, businessman, digital strategist and UDA political party spokesperson. He is also a former journalist who has received many awards for his work. Itumbi is known for his unwaverring political views which have landed him in several scandals. 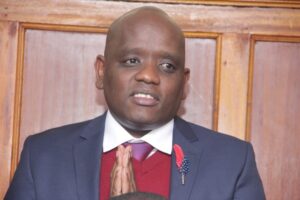 The businessman was born in Gichugu, Kirinyaga County. His background contributed to his fluency in four local languages.  These include Maasai, Embu, Luhya and Kikuyu.

Dennis is the eldest of his five brothers, two of which are known as David and Kevin Itumbi. Little details are known about his family and especially his father Patrick Itumbi. His mother Catherine, however, revealed that she only has two sons. It has been implied that his father is married to other wives who are the mothers to his other sons. Catherine has been in the public eye for quite a while, giving political speeches at public events.

The politician attended Meru Highschool for his secondary education. He started showing a lot of interest in journalism and went out his way to get all the knowledge he could on it. This led him to pursue a diploma in journalism at the Kenya Institute in Mass Communication. Later on, he attended Moi University where he got a degree in Mass communication.

He decided to further his studies and he traveled to the United Kingdom for his Masters Degree. Itumbi attended Leicester University where he got his Masters degree in New Media Governance and Democracy. His initial career path was to become a lawyer but he did not qualify due to his high school grade.

The ex-journalist began his career working alongside Dennis Onsarigo a renowned Kenyan journalist. Their earnings were approximately KSh9000 per month. They later on parted ways and went on different paths. During his early time as a journalist, he worked in Royal Media Services, The Standard, Voice of America and KBC. He then decided to switch from mainstream media and started his own blog, dennisitumbi.com.

The blog opened a lot of career opportunities for him as a journalist and he got a lot of political connections. This led him to be appointed as the State House Digital Communication Director before he was fired. Dennis then decided to form his own media house called Supreme Media.

During this time, he decided to involve himself in Agriculture. He still has his hand in the farming sector up to date. He started working as a Digital Strategist and Campaign manager for William Ruto, a job he still holds currently.

In early 2002, Itumbi revealed that he was going to meet his girlfriend for Valentine’s day. Things, however, seemed to not have gone well and he later said she was married. Over the years, Itumbi has not had much rumors about his relationships. He, however, was rumored to be dating presenter Jackie Maribe. Although they have never officially confirmed their relationship, the two have been spotted together so many times.

In December 2021, reports announced that he had been kidnapped and attacked by unknown people. It was rumored that there were three men who kidnapped him in Thindigua in a white van. Later on, however, Dennis was freed and was hospitalized after being brutally beaten.

Many social media users reacted with many alleging that it was a lie so as to get public sympathy. Itumbi’s political rants and thoughts have brought him a lot of backlash and hate from people on so many occasions, especially on social media.