Aisha Jumwa Katana is a Kenyan politician and the current Member of Parliament for Malindi Township. She is a member of the Orange Democratic Party and known for her honest and piecing remarks that always catch most politicians off-guard especially those calling her out. She is one of the most controversial female MPs who has been linked to some huge controversies.

Aisha Jumwa  is the second born in a family of five members.

Aisha Jumwa started school at Takaungu Primary School before joining Murray Girls Secondary School for her secondary education. Aisha, however, dropped out in form two due to inadequate school fees and started doing small businesses. She then made her debut into politics before going back to school. Jumwa joined Nyali Senior School in 2011. The MP then joined JKUAT and studied for a Bachelor’s degree in Commerce and graduated in 2016 while she was a women representative.

After dropping out of school and venturing into politics, she joined KANU party and was elected Councilor and chairperson for Kilifi town Council. In 2007, she ran for the seat of Member of Parliament at Bahari Constituency and did not win. She was persistent and in 2013, she joined ODM and elected the women representative for Kilifi County. In 2017, she became the Member of Parliament for Malindi Township.

In 2022, Aisha Jumwa was appointed as the Cabinet Secretary for public service, Gender and affirmatice action by President William Ruto.

The outspoken MP has been married twice and in her first marriage, she returned the dowry after her in laws insisted that she should not venture into politics. She had two kids form that marriage.  She was later married to Karisa Nzai Munyika a fellow politician but they divorced in 2014. It is rumored that this was because she was elected into higher office while he was just an MCA. They had a daughter before their divorce. She is now a single mother to Karisa, Selina and Ruth and also a grandmother to Morgan. 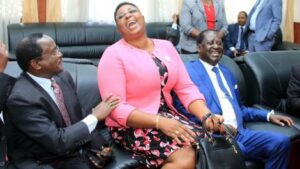 She was arrested along with some other people after a person was shot at her home. It is said that the person stormed into her house and shot. Aisha denied the police to access and they had to arrest her later on. Jumwa and her bodyguard were granted KES 500,000 bail and the court said there wasn’t enough evidence. She was also questioned by DCI over an amount of KES58 Million public funds that were looted. In addition, she has rubbed her shoulders with several politicians like Atwoli. 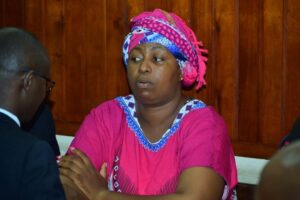