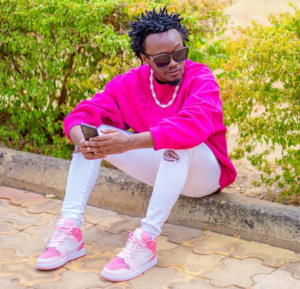 Peter Blessing has says he trusts God to help him. He has finally addressed his beef with celebrated artist, Kevin Bahati. He spoke about this after the recent album launch of Mr Seed at Pride Inn Hotel. The upcoming artist claimed that he had been very grateful to have been invited to the launch since Seed is a dear friend of his.

Speaking about Bahati he said that he was still grateful that he had left EMB because every step has a reason. He mentioned that despite the artist being mad at him, he had asked for forgiveness and he still loved him. He also explained that despite Bahati shutting the door of his vehicle on his face during the album launch, he did not hold a grudge. He apparently understood that human beings get mad too.

Trusting in God for Growth

Despite all that, he said that he was still trusting God for growth. After watching what Bahati had said about him and David Wonder recently, he said that all he could do was believe that God would still give them a chance to grow. He believes that it is better working as a single artist than working under a record label because he made his plans by himself and produced as many songs as he wanted.

Remember in a recent video, Bahati declared that the two artists he had raised and who had allegedly turned against him would never grow. He said that there would only be a change in their lives if they repented. Peter Blessing though thinks that Bahati was just angry at the time but that everyone was bound to be forgiven at some point.

At the moment Peter Blessing has revealed that he has released three songs. He also has almost thirteen thousand YouTube subscribers. According to him, he has and keeps on growing daily. He is still grateful that EMB built him.

Here is the video