Francis Atwoli has won his wife, Mary Kilobi’s heart once more after performing excellent dancing skills during their recent shopping trip. Kilobi posted a short video on Instagram demonstrating how the Central Organization of Trade Unions (COTU) chief spiced up their shopping experience. 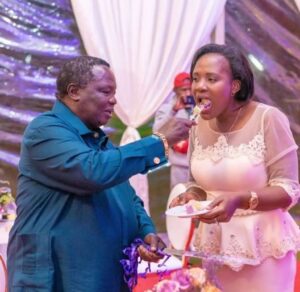 It is important to break loose sometimes and have fun. Atwoli is seen in his element, enjoying every bit of it. This is a side of him that Kenyans do not get to see om a regular. Kilobi captioned the video with, “Hon Koyoo and SG himself, shopping in style.”

The COTU head can be seen receiving some garments from a shop attendant, amidst laughs from both Atwoli and Kilobi. This happened in Hurghada in Egypt. Dressed in a blue T-shirt, Atwoli can be seen swaying left and right beaming with so much joy.

Here are a few of the comments on the video.

beautykeren : Age is just a number @mkilobi. Life is beautiful.

In 2016, the outspoken COTU leader fell in love with the ever smiling Mary Kilobi.

Kilobi had initially declined his proposal before eventually gave in: taking his hand in marriage.

Their love life seems like a match made in heaven. Atwoli remembers meeting her for the first time in Uganda, where she worked as an intern. She was also a student at the Makerere University. It was love at first sight for him. 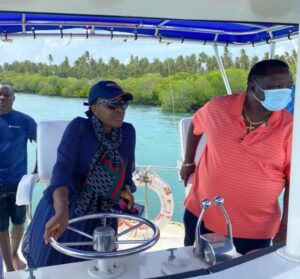 The COTU chairman, Kilobi reveals, is a responsible and caring husband who comes home from work right away. The pair resides in their house located in Kajiado county.