Weddings are highly regarded in the society and some leave people talking years later. Throwing lavish weddings has become a norm and a lot is spent on the actual wedding day than any other time. Below are some of the most expensive celebrity weddings in Kenya;

Sharon, popularly known as “This is Ess” is a popular Kenyan media personality and sensation. The proposal was short of magnificent at Lake Michaelson, in Mount Kenya. Letina’s proposal broke the internet and they had their wedding a year later. Their all-white wedding was held at exquisite Medina Palms in Watamu. It was an all invite wedding attended by close family and friends. The two separated in 2017 amid cheating claims. This was after two years in marriage and one child.

The two are popular Kenyan media personalities that have graced screens for a while. Their wedding was a surprise many as they hosted it at Sawela Lodge in Naivasha. It was attended only by close friends and family. Their Photos were more than gorgeous as they shared their beautiful day online. 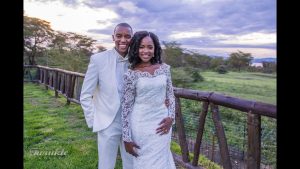 They had a vintage inspired wedding as Paul wore a tuxedo with long tails. Evaline did not disappoint as the brid as she wore a mermaid peach dress and her bridesmaids in olive green dresses.

The gorgeous actress went off the market after a colorful wedding that happened four years of dating. Martin and Sarah shared their beautiful day in Karura forest and a jet to Los Angeles after the ceremony. The wedding was themed purple and white and was invites only. 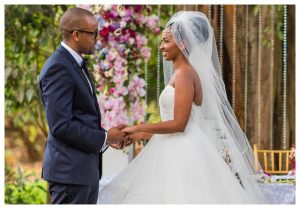 The couple weddings were legendary as they held three wedding in East and West Africa. They had their traditional wedding in Kelelwa, followed by a modern wedding at Windsor Golf Club. The wedding had a lavish reception at  Nairobi Safari Park Hotel. A week later, Nigeria where Anslem is from, celebrated with other ceremonies. The rich businessman did not disappoint and showered millions on the weddings.

Linda is daughter to popular pastor Pius Muiru. She does not rely on her father’s money and is a software engineer with her own coin. They reportedly spent Ksh9 million on the baby shower and had an alleged party in the US that costed Ksh3 Million. The wedding dress was allegedly Ksh500K including choppers and other costs in the wedding.

After offering a very expensive dowry, the ceremony was magnificent. It included choppers and expensive chauffeuring. They had a white house carriage chauffeuring them to Windsor Hotel Lake. Safari Park Hotel in Nairobi hosted their colorful reception